“Grief is unfinished hurt” affirms Rohr (2005, p. 84). Grief is the work of learning how to weep. This is a kind of work that men usually don’t want to engage with, and their ego has been planned and actively to come up with strategies to avoid this work. No wonder, men only decide to engage in the work of grieving when there is no other alternative - when all the resources are gone and the path of suffering is the only one there is.

Joseph Campbell wrote about this ‘darkness’ phase in his book ‘The Hero of a Thousand Faces’ that has inspired so many movies and super heroes. The best cartoon hero that illustrates grief work is the story of Bruce Wayne - Batman. A young boy who falls in a cave and feels terrorised by bats, and at the same age, witnesses his parents being murdered in front of him. Such a traumatic event for a boy of 9 y/old. Eleven years later, the unfinished hurt is so huge that he leaves his home on a journey and disappears for seven years. In this journey, he became like a burglar, and literally wandered around lost in the world. Then, the League of Shadows find and guide him through a path where he could process his feelings of guilt, shame and anger and transform them in what later becomes Batman. This is a great metaphor or archetype that demonstrates the outcome of doing the work of grief.

Royal Grieving : The Good and The Bad Boy

However, life is not a fairy tale. A real case recently raised in the media was about the Princes and their suffering of losing a mother at younger age, and how both of them suffer differently. While Prince William suffered internally and chose the path of the ‘good boy’, Prince Harry’s suffering was revealed through his rebellious behaviour, being more like the ‘bad boy’. Only after two decades of such suffering, they both decided to open up to the public their struggle with grieving, in order to encourage people to engage with their personal suffering and take care of their mental health.

Grief is the work where feelings, empathy and vulnerability are the main tools. With them men learn how to carry the suffering of legitimate pain, leading to the lessons one must to learn to become an Authentic Man. Rohr warns every man that it is better to do this work with a coach who has been there himself (2005, p.85). This in depth transformation always happens in liminal space ( a place where you can’t fix, control, or even understand what is really going on ). Therefore, it is necessary to seek some expertise guidance in holding the pain to keep the ‘edges hot’, that is, to keep the pain or creative tension alive until the lesson is learned. I am Felipe Oliveira, holder of a Masters in Counselling with almost six years of experience in the Authentic Male Journey myself. Feel free to contact me by mobile, e-mail or social media for an informal chat or to book a session.

Men’s Crisis and its Outcome

No wonder there is a crisis going on among men. Domestic violence, moral aggression, sexual immoralities, mental health issues and suicide are the fruit of a lack of grief work. It becomes the only way the pain can be released. The shame in accepting there is pain is so embarrassing, that we (men) find it better to hide through aggression - considered a more masculine action - until the moment everything is lost and there is nothing but darkness. 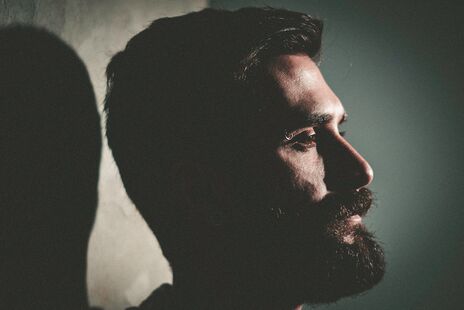 Felipe Oliveira provides counselling to let men grieving. Click here to know more about his work . Or, please, continue reading about grief work among men that can lead to Authentic Masculinity. Felipe Oliveira is a registered counsellor for men to grieve properly.