In a past blog I said that ‘Loyal Soldier’ (Plotkin, 2003) is the games our ‘false self’ taught to play in order for one to feel safe, loved and accepted by the most important people in one’s life - the parents at the beginning, and later goes to spouses, peers, co-workers and bosses. One of the main strategies used by him among men is to “restrict their range of feeling by encouraging us to always be in charge, busy, angry, ruthless, withdrawn, and/or numb; and surpassing our intelligence, talent, enthusiasm, sensuality, and wildness by locking up these qualities in an inaccessible corner of our psyches”. Plotkin reveals that the Loyal Soldier’s adamant is this: “it is better to be suppressed or inauthentic or small than socially isolated or emotionally crushed - dead” (2003, p.93). Clearly, the loyal soldier is of vital importance to survive in the system we live in. It is not all that bad. It becomes a problem when one lives all his life according to the Loyal Soldier’s strategies. Another authority on the subject, Thomas Keating, call this strategy as the Emotional Happiness Program, but for now, let’s stay with the term loyal soldier.

The Process of Discharging

The process of discharging is divided into four stages: “1) love them and welcome them home as hero; 2) thank them a thousand times, deeply and sincerely, for their bravura and courage; 3) tell them, over and over, with gentleness, kindness, and compassion that the war is over; and 4) when they are ready, help them find new societal roles for their talents” (Plotkin, 2003, p.93). It is a powerful process in one’s life, where for each individual the strategies are expressed in different forms, therefore the process to discharge and how to relate to them is always different and extremely personal.

In the process of counselling or of having a Sacred Conversation to discharge him is of vital importance to let the Loyal Soldier know you possess emotional and social skills that will help you to face criticism and rejection. When having the meeting with him, the ability to use your own imagination to relate to him is highly important. Candles, poems, music, nature, solitude: these are just a few examples to use, you can create many more. In this way, you will start act as your own Parent (with maturity from your own personal life experiences), and no longer needing an outsider authority to protect and nurture you. You will start to become an Authentic Man.

The term loyal soldier is originated from a “World War II epilog, where hundreds of Japanese marines and soldiers who survived shipwrecks or plane crashes in the Pacific found themselves stranded, alone or in small groups, on uninhabited or sparsely settled islands. Some of them managed to endure despite extreme conditions and severe social-cultural isolation”. They were discovered several years after the end of the war, which they struggled to believe, “because their loyalty to the cause was what had kept them alive all those years” (2003, p.92). The process of discharging is hard and feels like death. It is as Rohr says “to let go of the Loyal Soldier is like a severe death and an exile from your first base”. The retirement only happens after great confrontations like love, death, suffering, subtlety, mystery, and others. Therefore, when compared to our inner journey, our Super Ego will struggle and suffer to understand that he is not needed anymore, that his services and strategies are no longer necessary. That it is time to the Super Ego (or Loyal Soldier) to retire. The Ego will fight as hard as he can to prove he is still worthy. That is the point where the symptoms of depression, anxiety, PTSD, and suicide comes up, revealing something deep inside is disconnected, in chaos, confused, facing an unbearable unknown future. The process of retirement or of discharge the Loyal Soldier needs to be initiated.

Felipe Oliveira is a Registered Counsellor for men who wants to embrace Authenticity .

To read about Counselling for the Mother & Father Wound, click here. 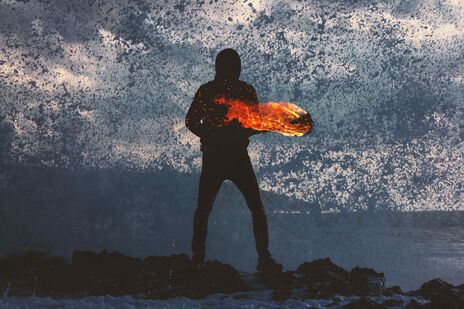